It was to be a decisive move that put an end to the Euromaidan protests. After three months of protesters camping on Ukraine’s main city square, pro-Yanukovich forces moved in thousands of protesters. Although they were not the first casualties during the past quarter of the year, the 28 people (or more — exact, verifiable figures are hard to come by) who lost their lives on the night of the 18th February were to mark a change in the atmosphere on the Maidan.

Ukraine is now right on the brink of civil war. While it’s unclear which side fired the first rounds, it is now all but certain that both protesters and interior ministry forces are now armed. There are rumours that interior ministry troops are refusing to fire on protesters, but the restraint shown so far may well be a political decision. While Ukrainian sources are claiming that three EU ministers are meeting President Yanukovich, EU sources are saying that the ministers have been evacuated for their own security. The latter would seem to be more reliable at the moment. 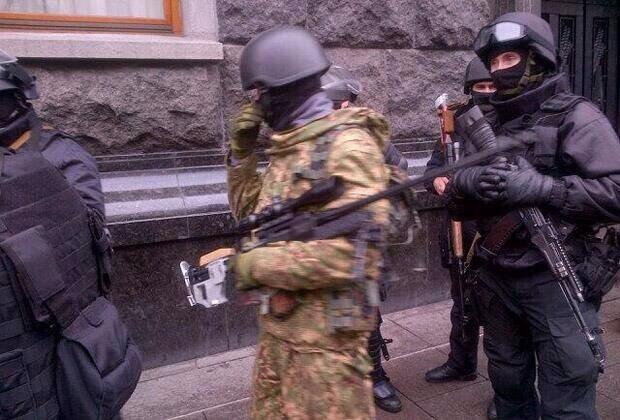 Oh, and this guy just showed up with a hunting rifle. Off to the frontline. 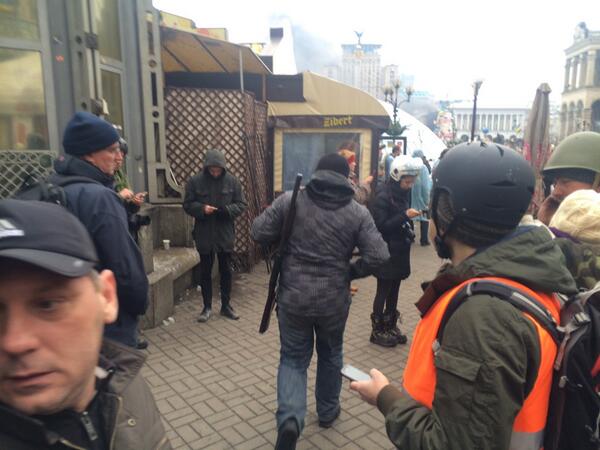 Live footage from in Ukraine (run by protesters) shows protesters in control of Maidan, but observers are keenly aware that the true reason for the live stream is insurance. Yanukovich is unlikely to allow his forces to resort to brutal violence while, quite literally, the world is watching. Nevertheless, reports from AP are claiming that 8 protesters died this morning while trying to storm a building near the square, while other reports put the number as high as 35.

Kyiv Post journalist Christopher Miller is also reporting that protesters have captured more than 50 police, and are currently keeping them imprisoned in a building controlled by the protesters. 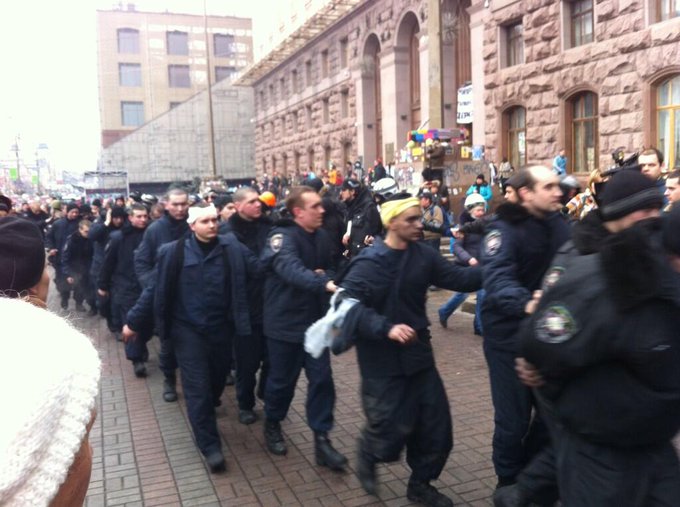 What initially began as a protest against Yanukovich refusing an EU co-operation deal has descended into a more general anti-government movement. We have seen Ukraine’s nationalists capitalising on this, as well as opposition politicians encouraging the protests and government officials losing their jobs. The EU seem to be trying to defuse the situation, calling on Yanukovich to avoid violence, and threatening concrete sanctions. However, the lumbering moves of international democracy are almost certain to be too slow to keep pace with developments in Ukraine. Meanwhile a video made on Maidan has gone viral, in which a young protester explains her reasons for being on Maidan. The video predates much of the most recent violence.

The future is unclear, and for the first time in a long time hushed whispers of secession are spreading. Lviv, another Western, pro-European Ukrainian city has declared political autonomy, and is rejecting Yanukovich. While a split is unlikely, it does make some geographic sense: the vast majority of pro-Europeans live in the Western half of Ukraine. Whatever the future in Ukraine, it’s hard to imagine Yanukovich as part of it. For more updates on the situation, follow my twitter, @d1sxeyes, and keep an eye on the live stream.